IoT, the Internet of Things, are systems where all kinds of “things” (devices, processes, systems) are connected enabling these interconnected things to control one another to solve problems and to create new business models through digitalization.
Although the conceptof IoThas been around since 1999, when RFID (Radio Frequency Identification) expert and industry pioneer Kevin Ashtoncoined the phrase. But nearly 20 years on, it’s still rather new. At that time, most of the information on the internet was created by humans. But because of our faults and limitations, it was realized that sensors and machines could and shouldbe creating and sending their data directly to the internet. This was the concept behind M2M (machine to machine), and until recently had been the more frequently used term.

Difference between IoT and M2M

So are IoT and M2M one and the same? While some parts of the basic concepts are similar, there are some important differences.

In M2M, a uni-directional monitoring of a single type of device is the norm. Typical examples of M2M applications include measuring the amounts of materials and inventory to manage production & quality control at factories or using GPS to determine the location of vehicles on the road. In such cases, data collected from the devices is stored in a single series and the results of data analysis are very rarely fed back to devices; or for data to be used to control the devices or to go through sophisticated analysis to manage the business.

The trend in the some of the more advanced IoT model trials in the West is to aggressively make use of IT, in particular, cloud, mobile, social and big data analytics, the so-called “Third Platform”, for industrial manufacturing, not just in their supply chains, but digitally arming their entire value chains as a means to use analog data on those platforms to tackle IoT

Based on the above, the following five items are characteristics of IoT that are different from M2M.

What made Iot a topic of interest?

IoT has become one of the hottest topics over the last several years, so much so that it’s not hyperbole to say that not a day goes by that we don’t see “IoT” in some media. What caused IoT to become the center of attention?

One reason is that the explosive proliferation of smartphones and the accompanying price drop due to mass production of sensors has dramatically lowered the bar for IoT implementation. Cheaper sensors, lower maintenance costs due to cloud services …. cost for sensors, lower costs for service maintenance due to dissemination of cloud services and networks due to communication infrastructure control and new communication technologies such as LoRaWAN and SIGFOX.

Another reason is the advancement of technologies, such as big data analysis and AI. Collecting data per se does not mean much. The important point is to obtain insights from the data and come up with specific actions to improve business. Enterprises are increasingly becoming involved in IoT encouraged by such technology advancement.

Information on advanced initiatives carried out by Germany and the USA has also attracted huge interest in Japan. Germany has commenced Industrie 4.0 as a national policy in 2011. The effort was aimed to improve productivity and to decrease costs by collecting production process data from sensors embedded in manufacturing equipment.

Meanwhile, movement was beginning in the USA aiming fully digitalized integration of value chain and reality using IoT. “Digital Twin” became especially spotlighted as an IoT initiative. The technology takes real-time data obtained from factory equipment and replicates the physical environment on cyber space. Digital Twin allows manufacturers to simulate on a computer the best set-up of equipment in the factory to improve productive efficiency and apply it to the real environment.

In Japan IoT became a topic of interest from sometime in early 2015. Enterprises set up organizations under names such as “IoT Promotion Office” or “IoT Project” in April - beginning of the new fiscal year. At that time, the activities conducted by those organizations were mostly limited to information gathering. They had yet to specify what kind of actions should be taken.

Consideration and study on full-scale IoT business implementation began to move forward in fiscal year 2016. Activities by the IoT Acceleration Consortium, an organization that promotes IoT use and application by industry-academia-government collaboration, also began to boost around this time.

History and details of IoT initiatives taken by various countries 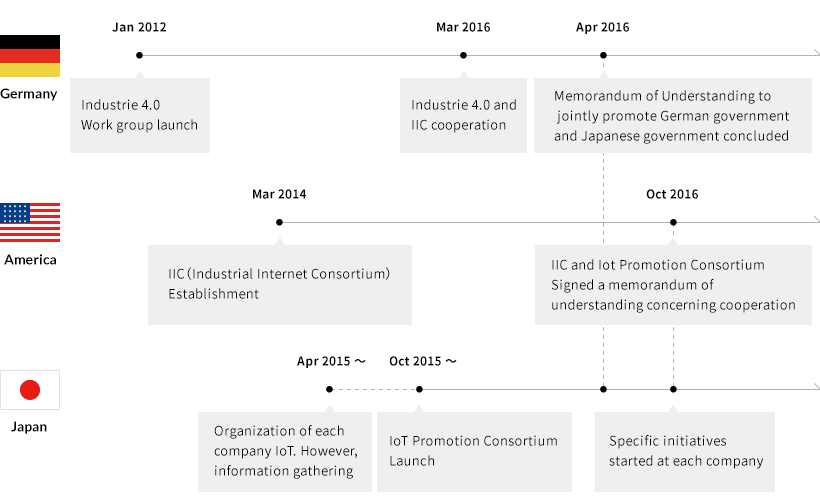 Where is IoT headed to?

In a nutshell, the final picture of IoT is assumed to be systems that reproduce the analogue and physical world on digital space as exemplified by Cyber Physical Systems and Digital Twin.

Digital reproduction of highly uncertain physical events allows us to make predictions. From a mid to long term point of view, IoT can be considered as one of the means or part of the process towards the final state. One of the successful examples is “meviy”, offered by Misumi. It is an online service that provides an estimate instantly when you upload 3D CAD data of the precision machine-made parts you wish to order.

The service is enabled by storing all information, such as operation status at processing plants, in digitalized form. Previously, information, including operation status, which can be linked directly to revenue information, had been classified as confidential. From now on Japanese enterprises are required to share information and focus on speed to take advantage of opportunities to maximize business. 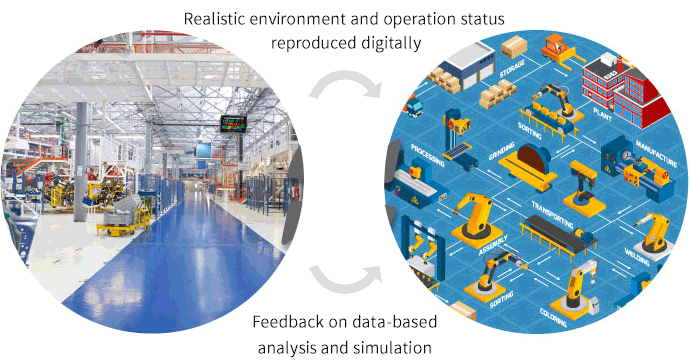 Key factor of Iot – the “edge”

IoT becoming widespread, huge amount of data from sensor devices are being uploaded to cloud servers. Processing and analyzing such data generates new values. Results of analysis can be fed back to devices for optimization. Facilitation of new business models becomes possible.

According to the forecast by IDC Japan, 50 billion objects are to be connected to the internet by 2020, and the majority of those objects will neither be smartphones nor PCs but IoT devices. The communication by all those devices via the internet would be incredibly costly and the volume of data to be stored in the cloud servers would be enormous.

One of the possible solutions to this issue is edge computing. In contrast with the centralized architecture which controls everything including the explosive increase in the number of devices, the accompanying network traffic and mounting costs to store the massive volume of data on the cloud, edge computing is based on the concept “collaborative distribution”. “Edge” means that the object is closer to the devices rather than to the cloud.

The “Internet of Things Reference Model” advocated by the IoT World Forum categorizes IoT architecture into seven layers. The bottom three layers are called the “edge”, and are considered to lower costs, minimize delay in data processing and maintain real-time response by delegating part of the task to the point where data is generated. 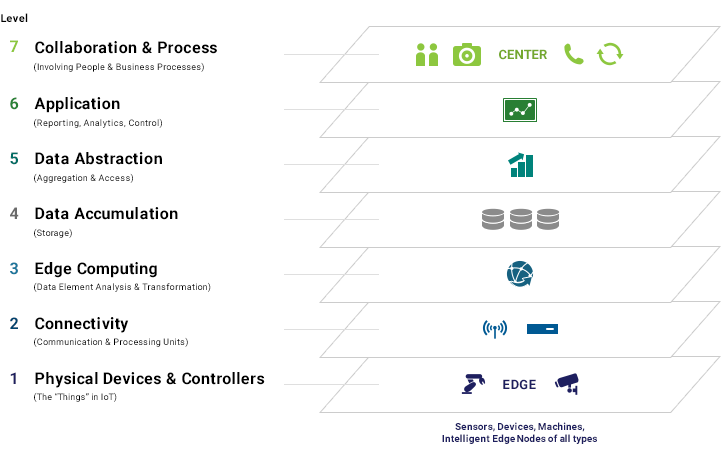 The distributed architecture is also expected to be adopted in fields where delay in network response has direct impact on the quality of service, such as autonomous driving and operation of industrial robots.

Total support for IoT based on the idea of open innovation

Experiments called PoC (Proof of Concept) are being conducted by many enterprises in Japan as part of their endeavor for IoT implementation. The reality, however, is that a lot of the companies face difficulties when they try to work out actual business plans by applying the PoC data and cannot come up with effective measures to move on to actual business execution.

For instance, when an IoT plan is initiated by a particular department, PoC is conducted while the purpose is still ambiguous and technological verification is insufficient. When they try to move on to commercialization or company-wide implementation based on the PoC, they face the necessity to draw up a modified business plan or to start all over from the beginning to examine about integration with their core system. There are cases that the project gets halted as a result.

In cases of common business entities, the suspension may last half a year to a more than a whole year. Such situations are called by the name “the dark tunnel of IoT” and a lot of companies have a hard time getting out of the tunnel. Uhuru offers a wide range of services and functions to support IoT business startup and implementation.