The new product, enebular Mesh Network EGRET, is equipped with edge side IoT gateway functionality, in addition to the existing enebular functionality. Applications can be developed for edge and the cloud in enebular, and assets transparently deployed to the cloud, gateways and devices, enabling optimal system operation. 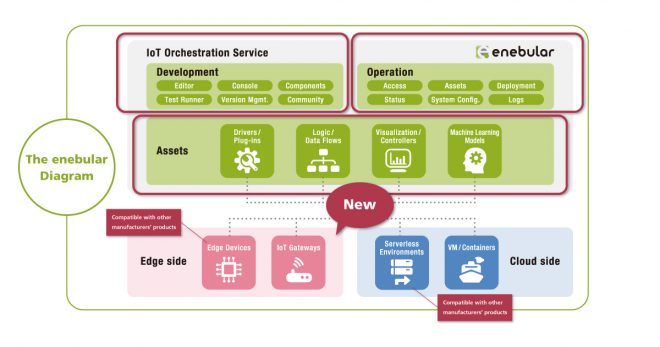 Leopalace 21 (headquarters: Nakano-ku, Tokyo, President &rep CEO: Eisei Miyama), the first adopter of enebular Mesh Network EGRET, chose to use the product in the testbed for smart lock control. enebular Mesh Network EGRET will be implemented in the testbed on each of the enebular base stations and technical validation of issues in the smart lock control service and application compatibility will be conducted.

enebular is Uhuru’s IoT Orchestration service.
enebular supports optimal operation of IoT systems on which vast numbers of devices work in collaboration, through simple and easy development of applications that connect edge devices with various cloud services. enebular is also equipped with features for security and scalability making it ready for commercial use. Since its release in 2014, numerous businesses seeking digital transformation with IoT and AI have adopted enebular. In May 2017 Uhuru became a licensed partner with Arm Ltd. for use of Arm® Mbed™ Cloud, allowing Uhuru to conduct development related to cloud, edge devices and end devices, with special emphasis on hardware security.

IoT orchestration is a group of tools that allows easier development and feature updates of applications for IoT platforms on which edge devices and the cloud work in collaboration, connecting with various cloud services, and utilizing data. IoT orchestration differs substantially from IoT platforms.

All names of companies, products and services are registered trademarks or trademarks of the respective companies.

Uhuru’s corporate philosophy is to “Create the future with technology and free thinking”. We aspire to contribute to our clients and society by bringing added value with innovative products and services based on the Internet. Focusing on IoT business, we continue to make transformation happen at our clients with enebular, our IoT Orchestration service that allows unified management of edge devices and the cloud. We are also working on next-generation telecommunications technology including NB-IoT in preparation for the upcoming era of 5G. Our teams of experts in consulting, engineering and creative production strive to create business at our clients by offer one-stop access to professional services in business strategy, technological support and communication strategy.